Back to the top
X

For almost 25 years, composers Edward Douglas and Gavin Goszka have been known as Midnight Syndicate and have been creating dark symphonic soundtracks to imaginary films that transport the listener to worlds of their own creation. To many, they are horror music pioneers crafting fifteen studio albums with their signature blend of orchestral gothic music and movie-style sound effects. To others, they will always be the first “haunted house band” that forever changed the Halloween music genre and became a staple in homes, amusement parks, and haunted attractions worldwide during the Halloween season. Still others know them as the duo that created the first official soundtrack to the legendary Dungeons & Dragons game trailblazing a new era for the use of music in the role-playing game industry. Reminiscent of sweeping, complex masterpieces by artists such as James Horner, Danny Elfman, Black Sabbath, and King Diamond, their critically-acclaimed music has been featured as a part of films, television shows, video games, and theatrical productions worldwide.

Since the end of the 90s, Midnight Syndicate’s music has been integral to setting a powerful mood at top-rated haunted attractions and amusement parks as well as at costume shops, Halloween events, and themed-productions from Siberia and Hong Kong, to Europe and the United States. In 2005, industry expert Leonard Pickel estimated that 75-90% of the attractions in the haunted house industry owned at least one Midnight Syndicate CD. In September, 2009, AOL released the Top 10 Best Halloween Music CDs of all time according to AOL/CBS Radio listeners. Three of the ten listed were Midnight Syndicate discs, which ranked lower only than Danny Elfman’s Nightmare Before Christmas and John Carpenter’s Halloween soundtracks. In 2015, their album Out of the Darkness was named as one of the 50 Essential Horror Albums – Discs that Created, Evolved, or Defined Genre Music Over the Decades by the venerable horror publication, Rue Morgue Magazine. The band’s music has also been used at Hugh Hefner’s Halloween parties, on Barbara Walters’ specials, at Universal Studio’s Halloween Horror Nights as well as on Monday Night Football and by artists Insane Clown Posse, Three Six Mafia, Twiztid, and the Misfits.

Founder Douglas’ passion for making music was ignited when he listened to records by The Beatles on his kid-sized turntable and dreamed of composing epic scores like John Williams’ Star Wars, Superman and Raiders of the Lost Ark. Both he and Goszka grew up watching classic black and white horror films, listening to Vincent Price reading the tales of Edgar Allan Poe and playing Dungeons & Dragons. They continued to fall in love with the world of horror, fantasy and the supernatural as they developed their own artistry: Douglas played piano and bass guitar, performing in rock bands and scoring student horror films in college while Goszka played keyboard in rock bands and went on to study classical composition and percussion in college. They eventually discovered ways to explore fantasy in literature, film, and art through music. 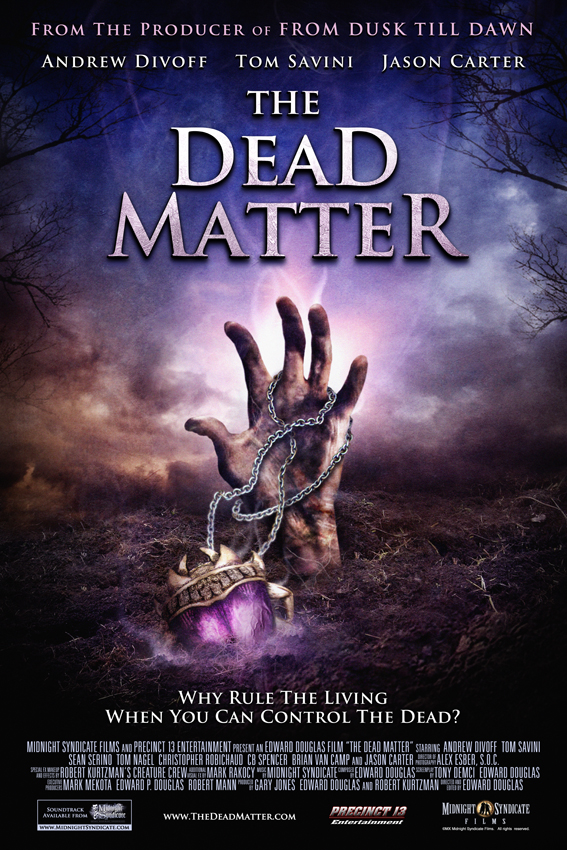 In 1995, Douglas directed and wrote his first full-length horror film score to a thriller called The Dead Matter (1995), which helped set the principles of Midnight Syndicate in motion. He would later direct and score a remake of that film alongside Robert Kurtzman (From Dusk Till Dawn, co-founder, KNB FX) and Gary Jones (Xena, Boogeyman 3) in 2010. However, in 1997, Douglas’ main focus was putting together the first Midnight Syndicate album. The goal was to provide a collection of “soundtracks to imaginary films.” This collection presented many different narratives through a variety of genres, including classical, New Age and rock and was punctuated by sound effects. For the sophomore release, Born of the Night, Douglas decided to focus on a Midnight Syndicate album that would specifically appeal to gothic music fans, Halloween enthusiasts, and role-playing gamers. It was at this time that he decided to partner with compelling solo artist Goszka, whom he had known since 1994.

Midnight Syndicate released many studio albums between 1997 and 2005, among them Midnight Syndicate, Born of the Night, Realm of Shadows, Gates of Delirium, Vampyre: Symphonies from the Crypt and the multi award-winning The 13th Hour. They teamed up with Hasbro and Wizards of the Coast in 2003 to produce the first official soundtrack to the classic Dungeons and Dragons role-playing game. In 2008, Douglas’ and Goszka’s tenth studio album, The Dead Matter: Cemetery Gates came out as a preview to the 2010 remake of The Dead Matter film. That same year, Midnight Syndicate put together their first music video, a live performance of the song Dark Legacy, produced by Robert Kurtzman’s Creature Crew and Screamline Studios and filmed in the haunted historic Phantasy Theatre in Lakewood, Ohio. The band’s fourteenth studio album, Carnival Arcane (2011) was based on research into turn-of-the-20th-Century carnivals as well as the writings of Ray Bradbury and plays like a self-contained, vivid musical film. The disc garnered rave reviews from pressand won Best Horror CD/Soundtrack at the 10th Annual Rondo Hatton Awards.

In 2013, the band released gothic music vocalist Destini Beard’s A Time Forgotten, the follow-up to The Dark Masquerade, her first collaboration with Douglas and Goszka and completed the score to the grindhouse thriller Axe Giant: The Wrath of Paul Bunyan. In summer of that year, Midnight Syndicate released the soundtrack to that film along with Monsters of Legend, a tribute to the classic Universal, Hammer and Euro horror films that gave birth to horror cinema. Featuring cover art showcasing original Universal Monster images with an epic sound to match, the disc has immediately become one of, if not the band’s most critically-acclaimed album to date. In addition to cracking FEARnet’s Top 10 Horror CDs of 2013, in May of 2014, the album won Best CD honors in the 12th Annual Rondo Hatton Classic Horror Awards marking the band’s second such honor. Visit the Midnight Syndicate Store to see and hear more!

After seventeen years, fourteen studio albums, three soundtracks, and a motion picture, Midnight Syndicate announced that they were teaming up with the world famous amusement park, Cedar Point, to launch their first live performances. Midnight Syndicate Live! Legacy of Shadows, a multimedia horror-themed concert blending live music, theatre, and film debuted at Cedar Point’s 18th annual HalloWeekends event. Before the shows, Charles Bradshaw, Corporate V.P. of Entertainment for Cedar Fair was quoted saying, “Working with these industry leading music producers on a live show is an exciting prospect. The final product is going to amaze.” And amaze it did. Upon its debut, the show began breaking attendance records while being called “top-notch and ambitious,” “brilliant and artistically creative,” and “a must see” by audiences and press alike. “The success of the inaugural run of Midnight Syndicate Live! has ensured that live Midnight Syndicate shows will be a permanent part of our plans going forward,” said Edward Douglas.

In September of 2015, Midnight Syndicate’s Out of the Darkness album was included in Rue Morgue Magazine’s 50 Essential Horror Albums – Discs that Created, Evolved, or Defined Genre Music Over the Decades. That same month, Midnight Syndicate released Christmas: A Ghostly Gathering. The album featured the band’s unique twist on classic holiday carols blended with new and original material. “Our goal was to treat each song in a way that would merge familiarity with originality,” said Gavin Goszka. “There are definitely recognizable elements, but plenty of additional original material as well. It also incorporates the widest instrument palette we’ve used to date and represents what we consider to be the most varied collection of songs we’ve ever released. There are serenely beautiful moments here alongside more intense, darker tracks, and the end result is a thoroughly compelling and involving listening experience.” “With so many Christmas-themed albums out there, we wanted to make this collection uniquely our own,” added Edward Douglas. “I think we were able to do that.” Since its release, the album has received universal critical acclaim.

In April of 2016, the band announced that they would be creating the first official soundtrack to the immensely popular zombie apocalypse-themed board game, Zombies!!!. “I’m a big fan of Zombies!!!,” said Edward Douglas. “With the game celebrating its 15th anniversary in 2016, it seemed like the perfect time to undertake this project. We’re working closely with the Twilight team to create something that really enhances their players’ gaming experience. I think album will also resonate with our fans in the Halloween and haunted house industries.” “Musically, it will be interesting to work in a modern setting,” added Gavin Goszka. “Most of our albums have been set in the Victorian and early 20th century, so this will definitely be something different and exciting for us and our fans.” In addition to releasing the Zombies!!! soundtrack in September of 2016, the band also reissued their gothic instrumental classic, Realm of Shadows. Raven’s Hollow: Realm of Shadows Reissue features the original recordings with a new introductory track and a previously unreleased bonus track from the original recording sessions.

In 2017, Midnight Syndicate celebrated their 20th anniversary with a return to Cedar Point’s HalloWeekends for another wildly successful incarnation of their Midnight Syndicate Live! show.  Their follow up production, 2018’s Midnight Syndicate: Conspiracy of Shadows featured some of their most involved storytelling as they continued their string of successful productions.  The following year, the band upped the ante for their third consecutive season at the park. “Our first three HalloWeekends shows formed a loose trilogy, with many common elements tying them together,” explained Gavin Goszka. “Now that the trilogy has reached its conclusion, we wanted to take things in a bit of a new direction.” “The new show has a little something for everyone,” added Edward Douglas. “I think fans of ‘The Twilight Zone’ series in particular are really going to enjoy it.” As was the case with the previous shows, Midnight Syndicate Live! 2019 was a huge success, showcasing some the show’s most advanced production elements to date.

The COVID pandemic of 2020 brought with it, many changes in the band’s plans. Although they did team up with Universal Orlando to release a limited-edition Music of Halloween Horror Nights album which sold out in less than 36 hours, most of the year was spent laying the groundwork for 2021.

In June of 2021, the band released their first live album. Entitled, Live Shadows, the album features new, never-released material, live versions of classic Midnight Syndicate songs, and a few “surprises.” Music videos for each of the four Midnight Syndicate Live! shows were also released in order to give fans a glimpse into the Midnight Syndicate live experience. Watch those videos here.

When the band announced the release of Live Shadows, they were quick to add that Live Shadows and it’s accompanying music videos were only the first of several things planned for 2021. Bloodlines, a brand new studio mini-album is scheduled for release on August 20th. Bloodlines is a prequel to the group’s chilling The 13th Hour album and takes listeners on a journey into the haunted estate and world of the mysterious Haverghast family.  In September, the band will be returning to Cedar Point’s HalloWeekends to perform one of their most popular Midnight Syndicate Live! productions, 2018’s Conspiracy of Shadows. Click here to visit the Cedar Point website for show dates and times. There is still even more to come this year so stay tuned!

From us and our families to you and yours, Happy Thanksgiving! ... See MoreSee Less

The ghosts of turkeys past

The same to you 🙏

Same to you and thank you for the gift of music.