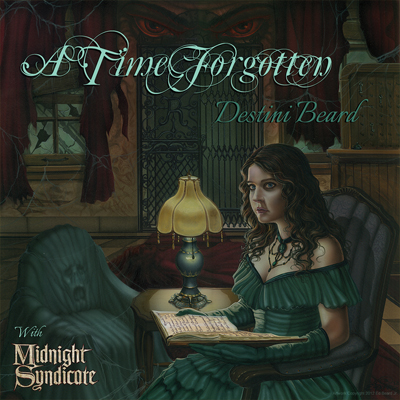 Vocalist Destini Beard has just released A Time Forgotten, her full-length followup album to 2010’s The Dark Masquerade EP. This time listeners’ journey to a haunted Victorian hotel where dark secrets lie deep within the rooms’ walls. Once again, the new CD blends Destini’s haunting and alluring operatic vocals with the music of Midnight Syndicate.

“This new album takes you back to the early 1900s, where a once-thriving hotel suffers a tragic fire and is lost in time. It’s departed guests are trapped by an evil presence which controls their very souls. The story goes on to tell of a young woman from the present who is called from the spirit world to travel back to the hotel so that she can reunite with her departed true love. What comes next is a chilling turn into the unknown.”

“Sonically, the CD is reminiscent of a short musical, with multiple layers of harmonies and counter melodies on each song. The recording process took much longer than ‘The Dark Masquerade’ but I feel the end product was worth every bit of it. There really is a good deal of variety with each song, taking you further along on the adventure.”

A Time Forgotten also features an incredible dance industrial remix of Farewell Forever (Noctem Aeternus) from The Dark Masquerade EP. The remix was produced by Pat Berdysz of Encoder, whose credits include the Dead and Buried Remix of Midnight Syndicate’s Graveyard from The Dead Matter: Original Motion Picture Soundtrack. Also included is the touching final track, My Last Goodbye, an original composition written and performed by Destini herself.

A Time Forgotten is now available at the Midnight Syndicate Store and at Destini Beard’s website, www.DestiniBeard.com. To read an interview Destini did with Drive-In of the Dead about the CD, click here.