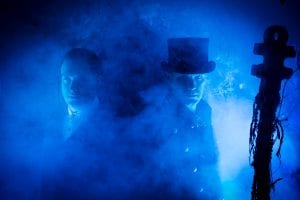 This summer, Midnight Syndicate will be releasing their first live album! Entitled Live Shadows, the album features new, never-released material, live versions of classics like you’ve never heard them before, and several surprises. In addition to the music, the band will be releasing music videos that offer a glimpse into each of the four Midnight Syndicate Live! shows they’ve produced since 2014.

This is just the first release Ed and Gavin have planned for 2021, so stay tuned! We encourage you to follow Midnight Syndicate on Spotify and YouTube as well as connect with us on social media (Facebook, Twitter, and Instagram). It’s going to be a busy and exciting year!