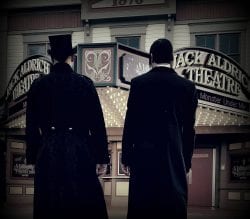 Midnight Syndicate Live! has returned to Cedar Point’s HalloWeekends. “We have a brand new set list and story, making this show a completely different experience from the last time we performed here in 2014,” said Edward Douglas. “I am extremely excited about the changes and I think audiences are in for a real treat.”

Since the Good Time Theater that previously housed the show was torn down for expansion, the new show is being performed in the 500-seat Jack Aldrich Theater. “I think that every performance space has its own unique character, and we definitely wanted to take full advantage of the more intimate feel of the Aldrich Theater,” said Gavin Goszka. “We’re able to do some things here performance-wise that simply wouldn’t have worked in a larger venue, and the fact that the audience is physically closer to the stage will hopefully pull them into the show in a very powerful and immersive way.”

The new show runs multiple times daily every Friday, Saturday, and Sunday from now through October 29th. Both Gavin and Ed will be making appearances after each show in the Midnight Syndicate merch tent outside the theater (which will be loaded with great stuff including brand new t-shirts, hoodies, and more!).