Back to the top
X

Midnight Syndicate’s long-awaited dark fantasy film directed and scored by Edward Douglas and co-produced by Gary Jones and Robert Kurtzman. The Dead Matter tells the story of a guilt-ridden young woman (Sean Serino) desperate to contact her deceased brother who discovers a powerful ancient relic that controls the dead. Her dark obsession drags her into the tangled world of two warring vampire lords (Andrew Divoff of Lost, Wishmaster and Tom Savini of Friday the 13th, Dawn of the Dead), each with his own sinister plans for the artifact, and a vampire hunter (Jason Carter of Babylon 5) who will stop at nothing to destroy it. Classic horror themes with modern twists and a touch of dark humor that will keep you on the edge of your seat.

CLICK HERE TO WATCH THE TRAILER FOR The Dead Matter

Fangoria Magazine (#297) – FANGORIA’S ‘DVD OF THE MONTH’ (OCTOBER 2010) – “Plays like a vulgar episode of ‘Scooby-Doo’ crossed with ‘Night of the Creeps’… the music is fantastic… Douglas clearly put his heart and soul into this project, and it shows… fans should flip their brainpans for it.”

Joblo.com (Arrow in the Head) – “Now THIS is what you want every single time you see an indie horror flick… a good comic-book esque horror yarn that uses practical effects and feels like a nasty Halloween party… The score is fantastic and atmospheric… a ton of fun, has great blood and guts, some hot lead characters, wonderful scenery-chewing horror actors and a sense of fun about it. What more can I say?”

Bloody-Disgusting – BLOODY DISGUSTING’s KEENAN ‘HORROR GUY’s ‘TOP 10 HORROR FILMS OF 2010’ “…just as haunting and creepy as the soundtracks they produce every year… I hope to see more installments in the near future just as good as this one.”

National Horror Examiner – “Great casting, humor, some cool gore, wicked FX by Robert Kurtzman, fantastic set design, awesome atmosphere, a unique take on vampire lore, and a phenomenal score make ‘The Dead Matter’ one of my favorite films of the last 2, or 3, decades!”

Stiff Mag (#6) – “…a brilliantly crafted dark-fantasy horror film that brings some much needed credibility back to the genre. Highly recommended for anyone wanting new, original, quality horror. This film really delivers – 5 out of 5 scars on the indie scale!”

Xomba’s Horror Channel – “Douglas has managed to brilliantly craft a horror fest with gore, humor and most importantly, a unique depth that many low-budget films lack entirely… The characters in ‘The Dead Matter’ are well-rounded, and the movie’s fast pace allows it to take the viewer for a spooky ride, throwing in some laughs here and there… (Douglas) does a fine job transforming his creative mind for music into a breeding ground for horrifyingly new ideas to bring to the horror genre’s plate.”

Wicked Channel – “True indie movie gold! … a breath of fresh air, showing that horror movies can still be effective but yet have heart and humor… a must-see!”

Benevolent Street – “…a very interesting and well blended smoothie of zombie and vampire goodness… the sound is amazing. The twists, visuals, occasional humor and sound are enough to keep the viewer interested from start to finish… Having already tackled the musical side of the horror genre… it should be no surprise to see Douglas climbing the ladder in the horror industry as a director. “The Dead Matter” can be considered a terrific start.”

Horror News – “Good old fashioned storytelling here, folks…multiple story arcs and conflict-ridden characters all very well written and all coming to a believable culmination by the time all’s said and done…. It defies every single page of the current Hollyweird rulebook of horror moviemaking by being neither a remake, a former TV show, nor edited in today’s standard quick cut Super Hi-Meth mode – it’s an actual story unfolding right before your very eyes… a modern Hammer film!”

Talk of Horrors – “I had heard good things about this movie, with Fangoria, Arrow in the Head and FEARnet singing its praises. So, does it live up to the hype? For the large part, yes. …refreshing to see someone who thinks outside of the box. (8/10)”

Best-Horror-Movies.com – SMALL SPOILER ALERT – “…stellar performances by Divoff and Savini… good character development… I enjoyed the humor in the film and caught myself laughing out loud several times. In fact, the more I think about this movie the more I want to watch it again.”

FEARnet – “…fast-paced and full of memorable moments. Midnight Syndicate always set out to provide a spooky good time with their music, with no other pretensions, and their first venture into filmmaking reflects that same spirit. It all makes for a solid debut, and I’m already looking forward to their next outing.”

Killer Reviews – “There is so much to like about this film… If you are looking for a fun film to watch this Halloween this is one to add to your list… You will be quoting lines from the movie all day and get another good laugh out of it again!”

Movie Crypt – “From twisted dream sequences to impressive displays of supernatural power, you can’t help enjoy a movie that gets so much of the genre right (when so many get it wrong) while still managing to pull a few new rabbits of the old hat. ‘The Dead Matter’ is a love letter to horror devotees as well as to Midnight Syndicate fans…”

Macabre Mansion – “This film breaks all the rules when it comes to the crap that Hollywood has been producing for years now. It’s not all blood, guts and gore (or) a collection of mind numbing fast cut scenes that will make you want to claw your eyes out… a fantastic supporting music score… from beginning to end this film tells a story…actors do a top-notch job… filmmaking at its finest.”

28 Days Later Analysis – “Totally enjoyable. The details have really gone into the production and the result is extraordinary… this reviewer encourages you to get your bloodlust fix in this well-written, well-orchestrated and comedic production. Totally enjoyable… here is one strong vote for more material from Douglas and his company Midnight Syndicate Films.”

Shallow Graves – “One of the better indies that I’ve seen in a long time …definitely a film that you should say that you have seen. With the tagline of ‘Why rule the living when you can control the dead?’ Edward Douglas did a few things that I wouldn’t have even thought of which were fresh additions to this concept …with little nuances that would make a serious horror lover smile.”

Horrorview – “…fun villains, unsuspecting heroes, some great visual gags, and a fantastic score. What’s not to like? …one of the most well-rounded special edition DVD’s available in independent film.”

Zombie Info – “A good time and fun as f–k… WELL worth picking this one up.”

13th Hour Magazine – “Douglas does a great job keeping the film moving right along through twists and turns… while giving a tip of the hat to classic horror movie themes and styles… an entertaining movie… one can only hope that we’ll soon see more from them.”

Drive-In of the Dead – “…The clever plot, the gnarly make-up, the perfect score (that had many nods to Midnight Syndicate’s past), and a healthy mix of b-movie charisma make this film a refreshing change from the usual horror schlock that Hollywood churns out. It’s always a thrill to see when a group of filmmakers ‘get it.’ For me, the dead definitely matter!”

Wildside Cinema – “…a total mish-mash of sub-genres that mix and mingle together to make a completely original viewing experience… director Edward Douglas, ‘music composer extraordinaire’, provides really solid moments of suspense with his set-ups, camera work, and music… I don’t usually say this but this DVD is worth a purchase… a beautifully produced release with a lot of extras.”

House of Horrors – “…an effective, blood filled addition to zombie lore while offering an interesting story twist that keeps you watching till the very end…. ‘The Dead Matter’ is home grown down and dirty horror made by folks that simply love it, appreciate it and respect it. You can’t ask for more than that… (also) Easily one of the best “special feature” packages that I have seen in a while.”

Hayes Hudson’s House of Horror – SPOILER ALERT – “…a great film and one that is definitely going into my collection… visually beautiful… acting is top-notch. I can’t recall the last time I saw vampires and zombies in the same film, but director Edward Douglas does a fantastic job of weaving them both together in the story.”

B-Movie Man – “…stands out amid the myriad field of zombie horror. The film mixes in a touch of humor with its gore, but doesn’t go over the top looking for laughs… a fusion of the zombie and vampire genres (with) unexpected twists…”

Bastards of Horror – “a clever entertaining mix of horror, fantasy, and mythology … I give it a 3 (out of 4) stars and a must have”

Eric Morse Show – “…with a wonderful character driven story, intelligent use of gore and special effects, and vampires and zombies as they should be, ‘The Dead Matter’ is just what the horror fan ordered….I give it four stars.”

Cult Cuts Magazine – SPOILER ALERT “a fun genre film that does something a little different with some old standards… the soundtrack is lush and at times borderline epic.”

Shockya – “…a must-see for fans of the music group and the horror genre.”

Chateau Grrr – “With an impressive cast and entertaining special effects, ‘The Dead Matter’ is a fun and functional film that merits a couple of viewings. 4 out of 5 stars.”

Horror Addicts – SPOILER ALERT – “What truly makes ‘The Dead Matter’ a film to watch is how they were able to tie all these horror elements together in a unique story… that and, of course, the music by Midnight Syndicate… a film many horror fans will enjoy.”

Nightmare Revue – “The sort of blending of Fantasy and Horror in ‘The Dead Matter’ just isn’t something you see much… a solid entry for Edward Douglas and Midnight Syndicate. It aims to do a little bit of everything and is actually able to succeed.”

Geek In The City (review starts at 44:10) – “…really cool and fun! In a market flooded with ‘Saw’ and ‘Hostel’, it’s a lot of fun to see an old-school, over-the-top Hammer-style horror movie and ‘The Dead Matter’ fits that”

BluRay-Disc.de (Germany) – “‘The Dead Matter’ is a convincing B-movie for all die-hard genre-fans who value deeper substance more than fancy special effects and lots of gore.”

Life Between Frames – “…this sucker is the kind of movie that gives certain Indie Horror a good name, as it has plenty of humor, Gothic ambiance, and engaging plot points to make it worth seeing.”

Living Dead Media – “Mr. Douglas has done extraordinary work with this film. It will keep the viewer engaged throughout (with) a little of everything that horror film fans most want to see.”

Rogue Cinema – “Delightful fun… The DVD extras are action-packed too, with enough features to keep a horror fan entertained for hours, if not days.”

BuyZombie – SMALL SPOILER ALERT – “A really fun romp that feels like a throwback to classic horror films of days gone by. I suggest picking this one up as it’ll grow on you (like an infection) the further in you get.”

Falls News Press – “a lot of fun… ‘The Dead Matter’ has a bit of everything… a bit of dark humor…more than a few scenes that made me jump and a couple of plot twists I did not see coming… Midnight Syndicate fans will not be disappointed by the excellent music.”

Drive-in of the Dead – interview with Edward Douglas

Geek in the City – interview with Edward Douglas 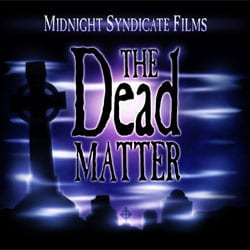