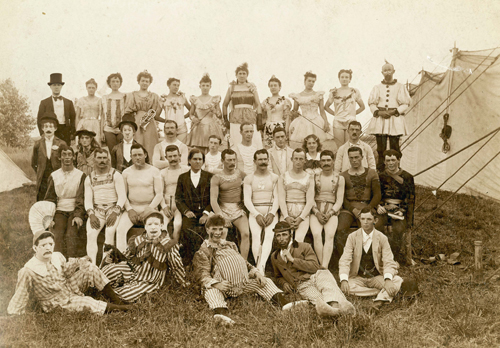 Midnight Syndicate will be releasing it’s fourteenth studio album, Carnival Arcane, on August 2nd. The CD will be available at Amazon, iTunes, and at great Halloween retailers nationwide. Preview tracks will be available shortly, as will information on pre-ordering the disc through the Midnight Syndicate Store. Plans are underway for a listening party that will take place in the Cleveland area August 1st (details to follow). Both Gavin Goszka and Edward Douglas will also be selling and signing CDs at GenCon Indy (August 4-7).

The theme of the new disc surrounds the Lancaster-Rigby Carnival, a shadowy, turn-of-the-century traveling circus with more than a few skeletons in its closet. “We spent a lot of time researching circuses and carnivals of that time period to ensure that the sounds and music work together to immerse you in this world,” said Edward Douglas. “There’s also a big tip of the top hat to Mr. Bradbury whose work inspired many of the more horrific elements on the disc.” Carnival Arcane also features the vocal talents The Dead Matter alumns Jason Carter, Brian Van Camp, and Dennis Carter, Jr.