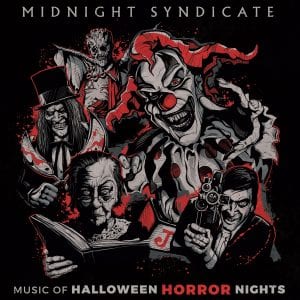 “We’ve had a special relationship with Halloween Horror Nights and the Universal Orlando Entertainment team for so many years now,” said Edward Douglas of Midnight Syndicate, “With this album, Gavin and I are extremely excited to memorialize some of the cool stuff we’ve done together.”

In the liner notes of the album, T.J. Mannarino, Vice President of Entertainment Art & Design at Universal Orlando said, “It is difficult to overemphasize how much the music of Midnight Syndicate played in the historic success of Halloween Horror Nights. Our art and design team drew inspiration from the various tracks from many of their albums as we envisioned, created, and produced early websites, attractions, scare-zones, and haunted houses. Those same sounds played throughout the event itself. Proof of this invaluable contribution is evident in this compilation of memorable cuts. To this day, Midnight Syndicate music wafts through our design studios as we imagine worlds to come.”

Happiest of Birthdays to my partner in musical mischief!

Happy birthday young man!!! Thank you for all the great music!!!

Happiest of birthdays to you good sir!

Happy Birthday! 🎂🎉🎈Thank you for the music and inspiration through the years and blessings for many more birthdays to come.

Hope you have a wonderful birthday, Ed!

Happy birthday from both of us ❤️

So glad you were born or we would not have Born of The Night!!! Happy birthday 🎂🎉🎈