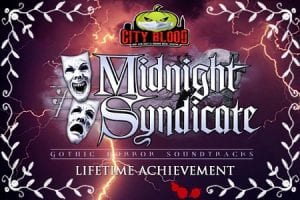 “City Blood had a very difficult time deciding who should receive our first ever Lifetime Achievement Award. The winner had to be someone who made a big impact in the haunt industry and they had to be a true example of what Halloween, haunts and horror are all about. City Blood’s Lifetime Achievement Award winner is none other than Midnight Syndicate. Their music is the soundtrack for many haunts across the country and their dedication to all that’s spooky and scary is truly appreciated. Midnight Syndicate has been entertaining fright seekers since 1997 with their unique and haunting soundscapes and they deserve more credit than they get. Congratulations Midnight Syndicate!”

Midnight Syndicate’s Gavin Goszka had this to say:

“It’s a bit surreal to look back on where this journey has taken us. What began as a passion project, fueled by the hope that what we were creating might find an audience among fellow Halloween and Haunt enthusiasts, ended up becoming something far more wide-reaching than we could have imagined. Sincerest and humblest thanks: to City Blood for selecting us for this award, and to all of our friends and fans who continue to support us.”

For over 17 years, City Blood, has been a resource for haunted houses based in Ohio, Kentucky, and Indiana. In 2019, City Blood became the first website to win the prestigious Oscares Award from the haunted house industry’s trade organization, the Haunted Attractions Association.