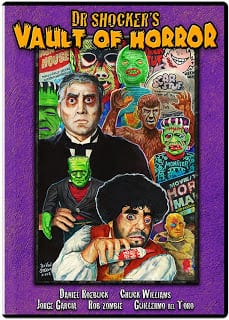 From the squad at Dr. Shockers: “Perfect for the monster fan in your dungeon, Dr. Shocker (Daniel Roebuck) and his lab assistant Igor (Chuck Williams) have cooked up over two hours of Monster Kid entertainment, including their fantastic all-new new shock-u-mentary video MONSTERMANIACS™ narrated by Jorge Garcia and featuring Guillermo del Toro, Rob Zombie, a cryptful of creature feature collectors, experts, fans with music by the critically-acclaimed Midnight Syndicate!

Whether you were an avid subscriber to Forry Ackerman’s Famous Monsters of Filmland, a frequent shopper of the Captain Company ads, a ravenous consumer of Imagineering Evil Teeth and Vampire Blood, or a casual collector of monster masks, toys and posters, DR. SHOCKER’S VAULT OF HORROR DVD is a tinsel-time treat you don’t want to miss!”