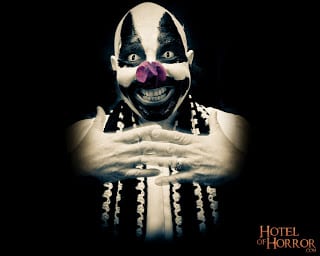 Not for coulrophobics. The Goons & Greasepaint video has been unleashed on YouTube! Over 100 clowns from some of the most suspect carnivals around the globe would love to meet you… “This music video montage is a tribute to Midnight Syndicate’s fans,” said Edward Douglas.”We asked them to send in their best clown photos and they obliged…” The video was produced by director Michael Raisch (whose works also appears on The Dead Matter DVD bonus features). “Mike had a challenge,” added Douglas. “We asked to include as many of the entries as possible. The problem is the song is only 3 minutes long. As always though, Mike found a creative way of incorporating these images in a fun, over-the-top, carnival-style.”The video is set to the song Goons & Greasepaint from the award-winning Carnival Arcane CD and features over a hundred clown images sent in by fans.