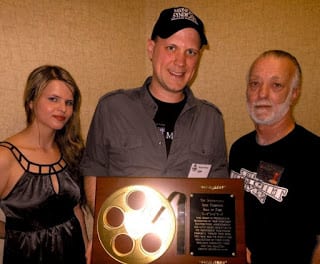 Edward Douglas was inducted into the Independent Filmmakers’ Hall of Fame at the Indie Gathering‘s Horror Hotel event in Hudson, Ohio, this past weekend. The award is given in recognition of “significant contributions, achivements, and outstanding dedication to the independent filmmaking community.” Citing Edward’s accomplishments in film scoring, the licensing of Midnight Syndicate’s music, and the directing of his own film, Executive Director Ray Szuch added “You’re not going to find a nicer guy. When I know someone like (Ed), I really like to watch how they work with other people…. that’s what turns me on. The individual.” Last year’s Hall of Fame inductee was FX legend/director, Robert Kurtzman (KNB FX, Creature Corps).

The award was presented by the Indie Gathering International Film Festival, an event which draws filmmakers from around the globe to Cleveland every August. Listed as one of Movie Maker Magazine‘s Top 25 film festivals for networking, the event exists to showcase the independent filmmaker. Filmmakers participate in their screenings and after the films speak with audience members who seek a closer look into the creative process. The festival features over one hundred films from around the world; twenty hours of film lectures and panel discussions; a convention room with special guests; networking parties; acting, stunt and FX competitions, and more. This year’s festival will be held August 16th, 17th and 18th at The Clarion Inn in Hudson, OH. For more information, click here.