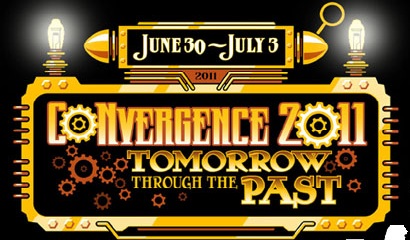 Midnight Syndicate’s Edward Douglas, and Dead Matter‘s Jason Carter and Brian Van Camp will be Guests of Honor at this year’s CONvergence Con in Minneapolis, MN June 30th through July 3rd. This will be Midnight Syndicate’s first appearance in the area. In addition to a Dead Matter screening and a Making of ‘The Dead Matter’ panel hosted by Edward, Jason, and Brian, all three will be on-hand throughout the con at the Midnight Syndicate table where they will be joined by actress Jen Sharlow signing and selling posters, DVDs, CDs, and other merchandise. Edward will be a part of various panels throughout the weekend including: Making a Living as a Creative Person, Surviving the Zombie Apocalypse, Demise of the Neighborhood Video Store, Vampires: When did they stop being monsters?, and Zombies and their slow (or fast) movement into Popular Culture. Both Brian and Jason will be hosting So you Want to be an Actor? and Jason will be doing a Babylon 5: From the Inside panel.