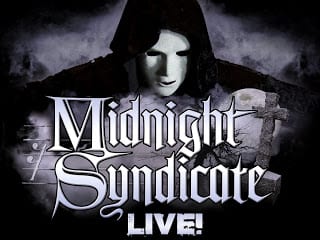 To our fans and supporters,

Very recently, we were presented with a new and very, very exciting potential opportunity for Midnight Syndicate Live!  We feel strongly that this is something that we need to explore.  Unfortunately, this will take us past the November 10th deadline for this Kickstarter campaign.  And so, in order to give us time to do our due diligence for our fans and backers, we have had to cancel it.

At the end of the day, we feel that we owe it to all of our backers who have pledged their hard-earned money to help create a live Midnight Syndicate concert, as well as to the fans and supporters who have helped us promote this campaign, to thoroughly explore this possibility.

If it were to come to fruition, this new opportunity would result in a win-win situation for everyone who is involved in and has backed Midnight Syndicate Live!  It would entail a live show in 2014. If things don’t work out, we will take what we have learned and launch a second campaign.

To everyone that has supported us and gotten behind this project so far we THANK YOU!   The amazing response we’ve seen to this campaign just shows us once again that we have the GREATEST FANS IN THE WORLD!