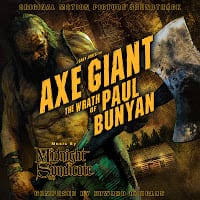 MantaRay Pictures – “Impressive. Edward Douglas is a chameleon on this project… (having) Midnight Syndicate branch out to capture the essence of Americana… the soundtrack pretty scary with gnarly brass, chilling strings and high-octane scoring.“

Gross Movie Reviews – “Fun, yet elegant period music that made me actually want to watch the film again to see how it helps blend the scenes together. Midnight Syndicate once again composes a soundtrack that is a must own for movie soundtrack collectors and proves their music is becoming a bigger part of the film than the film itself… I give it 3 ½ out of 4”

Games Gazette (UK) – “What makes this movie most memorable is the excitingly brilliant score that peaks, flows, rises and softens at all the right moments. Perfect background when you are alone in your home with the lights down.”

Pop Culture Previews – “…a nice brooding soundtrack… These are the sort of songs that Midnight Syndicate has mastered like no other… they continue to entertain as this album sounds significantly different than most of their works.”