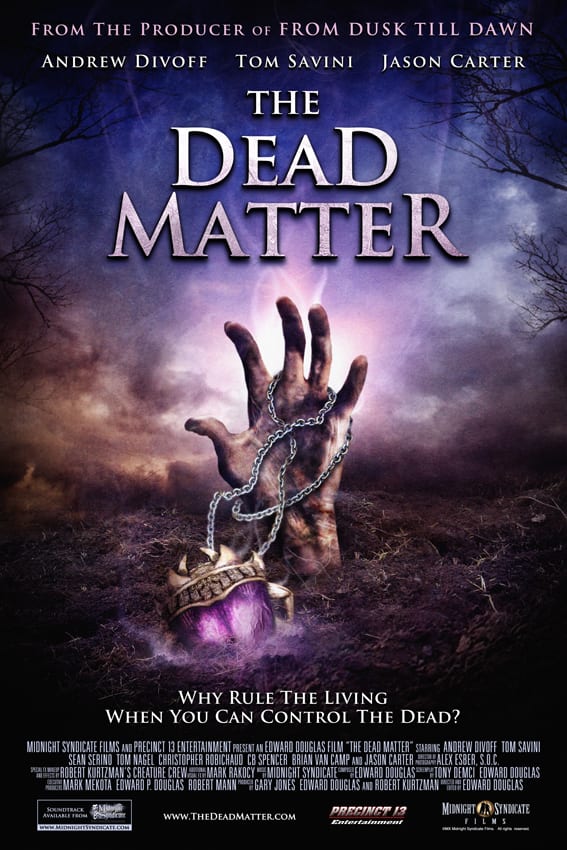 Eric Morse Show (08/14/2010) – In this age of glittery vampires and raging zombies that run amuck and devour everyone who stands in their way there are those horror fans who hunger for the good old days when vampires were predators you’d never want to date and zombies obeyed the will of their evil masters. Thankfully, a couple of these disenfranchised horror fans were Edward Douglas and his buddy Gavin Goszka, aka Midnight Syndicate. Ed and Gavin actually decided enough of this and went out and brought to the hungering horror masses the gothic horror film they’ve wanted. That film is Midnight Syndicate’s The Dead Matter.

The Dead Matter tells the story of Gretchen (Sean Serino), a woman in grief over the loss of her brother. While Gretchen and some of her friends are checking out some old stone ruins in the woods she comes upon an old scarab necklace. Gretchen puts on the necklace and decides to have a séance in the ruins to contact her brother’s spirit, but creepy things happen and the séance is cut short. Gretchen soon finds out that the scarab has the power to animate and control anything that is dead. Unfortunately, Gretchen also finds out that the scarab is being hunted down by two master vampires (Tom Savini and Andrew Divoff) and a vampire hunter (Jason Carter) set on destroying the scarab before the power to control dead matter gets into the wrong hands.

One of the things that set this film ahead of its competitors is that director, Edward Douglas provided this film the atmosphere that gave the old Universal and Hammer film that creepy gothic feel. Edward demanded that it be shot on film, because that was the only way to give the movie that grainy depth that only film can provide. Also, there was a lack of using gore for gore’s sake (though this film still provides enough wonderful makeup and special effects to please any gore hound). Edward and company used gore when needed in the film rather than using blood and guts to hide a lack of story elements. This is, of course, because screenwriters Edward Douglas and Tony Demci have created a multi-layered, character-driven, story that takes elements of classic and modern horror and brings out the best of both worlds. Finally, and more importantly the film takes two types of horror archetypes, those being vampires and zombies, and brings them back to a truly scary version of themselves. These are definitely not vampires you’d want to date, though Tom Savini is still cute as a button, and these zombies aren’t raging, uncontrolled, flesh-eaters.

In conclusion, I have to say that with a wonderful character driven story, intelligent use of gore and special effects, and vampires and zombies as they should be, The Dead Matter is just what the horror fan ordered….I give it four stars…