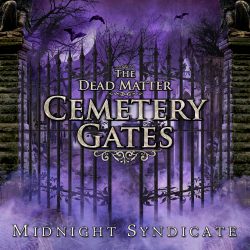 Bastards of Horror (8/18/08) – “Midnight Syndicate has their latest music CD available called ‘The Dead Matter: Cemetery Gates’. Fresh off of their effort for the film ‘The Rage’ in 2007 they bring another scary, eerie, and refreshing sound that makes you want to bust your Halloween shit out early and start setting up the house! This latest CD is not your basic background music for a horror film or cheap scary music you would find in the $3 bin. It’s a refreshing effort that can chill the hardest of hardcore horror movie fans’ bones and make you feel you are trapped in a Fulci zombie film or a ‘Hammer’ classic. Track number one, ‘Cathedral Ruins’ draws you in instantly as it brings images of Fulci’s great work in the early 80s when you first witness his films and sucks you with the creepy feeling you use to feel when you first started watching horror films in your childhood and does not let go of you until the last track ‘Lullaby’ ends. ‘The Dead Matter’ is a brilliant collection of music that could be used for your scary haunted house for Halloween or I can see it being used for a cool, inventive, creepy independent horror film. Midnight Syndicate’s latest effort is not the official soundtrack for the film ‘The Dead Matter’ which is scheduled for an early 2009 release but has some tracks from the CD that are used in the upcoming film. This news makes me very excited about the upcoming film to see where and how the tracks are used. Any horror fan that would hear this music would be stupid to not buy Midnight Syndicate’s latest collection of music as they prove again that not since Carpenter’s efforts during the 80s has such a collection fit the horror genre and made you as a horror fan want filmmakers making their latest project to include such a soon-to-be classic collection! I give this perfect fitting horror genre CD four stars out of four stars.”

For those in the know, Edward Douglas and Gavin Goszka of Midnight Syndicate have been tapped to direct and score the horror movie The Dead Matter due out in 2009. To avoid confusion for the readers though, this CD is NOT the soundtrack to the film but rather music inspired by the movie. The actual film score won’t be released until the film makes its debut. There ARE however, a couple of tracks from this release which will make an appearance in the film.

Like other Midnight Syndicate releases, The Dead Matter: Cemetery Gates wraps around tonal structures of the macabre and the wicked to help listeners formulate their own mental film images, their first non-soundtrack release since 2005’s The 13th Hour. Essentially, this release is a mental teaser to extrapolate on the various avenues where the movie itself will take its viewers replete with vampires, ancient Egyptian relics and the living dead. It also pointedly culminates all the various themes from previous releases where we are taken into the familiar orchestration of the artists with a few curves and twists thrown in so that it is not predictable.

For long time fans, the tracks Cathedral Ruins, Shadowed Grove, Meeting Of The Acolytes, The Revenants and Called From Beyond are classic Midnight Syndicate instrumental pieces that manage to provide a sense of comfort in their twisted darkened delivery.

Nightfall begins the journey into newer territory where the mind is jogged with a feeling of claustrophobic foreboding. It is as though sonically a darkened cloak has been hurled over our eyes and it is up to our imagination to peer through the veil. The Hunt takes on an even more orchestral and sound styling than previously heard by this duo. It is a full on movie score piece to rival some of the biggest names in the soundtrack industry. Across the Chasm layers subtle sound effects under a malevolently played piano while Cemetery Gates is a classical piece that could have been written by Jack The Ripper. Entering The Crypt does exactly what it title suggests. The sonic layers and subtle sound effects are crafted where you can’t help but feel as though you are quietly entering a forbidden grave in some misbegotten graveyard in some hellish nightmare. Alchemist’s Chamber will delight Phantom of the Opera fans as it takes that church pipe organ bombastic madness even further than the Phantom could have imagined. Tear of Osiris is where our duo earned their mettle as they managed to take ancient Egyptian stylization and twist it up to maintain the era while juxtaposing modern haunted elements without overkill. Dark Legacy manages to create a haunting bittersweet and unrequited realm wrapped heavily in horrific detail thus causing us to be alarmed and saddened simultaneously.

The bonus material are modern goth rock songs which were written specifically for the film and features maestro Gavin Goszka on vocals. In particular, Not Your Saviour is destined to be a goth/industrial club hit on top of being a major delight for the film viewers. Hopefully these tracks will be sent to club DJ’s across the globe on a special DJ release because they are not to be missed.

There is no denying that Midnight Syndicate continue to lead the pack for music destined for haunted attractions, role playing games, film and television. Above all else, they remain an annual favorite of Halloween fans the world over as they have made Halloween music a legitimate genre as opposed to those cheesy sound tracks of days gone by that hardly spook much less delight anyone over the age of 5. It is only a natural transition that this talented twosome should venture from music for the mind and slide comfortably into directing and scoring horror films for the masses. Until the film is released in 2009, we can at least enjoy the forthcoming Halloween season with this great addition to haunt our humble abodes.

Mourning the Ancient – “Alas, another outstanding release from Midnight Syndicate. All of the haunting atmosphere of previous releases returns. Eighteen tracks, plus three bonus tracks from the soundtrack of the upcoming film ‘The Dead Matter’ are included here. Every track is carefully crafted just as you’d expect from this talented band. Some of the Ancient Egyptian themed later tracks like ‘Tear of Osiris’ and ‘Forging the Scarab’ are an especially interesting twist. The bonus tracks are ‘gothic rock’ oriented… which aren’t for me. Everything else, is superb as usual.”

Paragon Music Magazine Issue #42 – “Midnight Syndicate never fails to deliver. With each album, there’s the potent mix of classical artistry interlaced with melancholy and terror. As soon as the CD starts spinning, the mood is set, and Edward’s and Gavin’s magic pours through. What I enjoy most is that there are always so many Classical elements that are often missing from other works in the same genre. I can’t sit and listen to horror movie music, but Midnight Syndicate has always been a cut above the rest…pardon the pun. Seriously, they’ve always been the type of band that creates a style of music that could very well be used as the backdrop to a scary movie but deserves more; in fact, you can say it deserves less, because the music itself sparks the imagination and you don’t need a visual for it to invoke emotions. It simply is the best music for those who enjoy a little bit of the dark side every now and then, and their evolution creates one masterpiece after another.”

Rue Morgue Issue #83 – “It seems like as long as there has been Rue Morgue, there’s been the Midnight Syndicate. And now, just in time for Halloween, Edward Douglas and Gavin Goszka return with another eerie offering of sinister soundscapes on The Dead Matter: Cemetery Gates. A companion piece to the duo’s upcoming feature film The Dead Matter, the album celebrates vampires, Egyptian relics, and the lumbering undead with a symphony of mourning church bells and ghostly gothic choirs that play games over a gently wounded piano. This disc provides plenty of dark atmospherics for ripe imaginations, and really, if Midnight Syndicate weren’t around at this time of year, I think we would actually have to cancel Halloween.”

Synergy Magazine (Australia) – Beyond the cemetery gates the dead do not rest easily. An ancient Egyptian relic, vampires, and the living dead lurk amongst its shadowy crypts. Midnight Syndicate beckons you into the dark world that inspired a major motion picture…

The Dead Matter: Cemetery Gates is the ultimate horror movie soundtrack. It is symphonic, classic, dark, and ambient, offering a layered sound which is creepy and edgy but not clichéd. I have always enjoyed various Midnight Syndicate releases, but I consider this to be their very best, thus far anyway! This is their first new original release since 13th Hour and it offers a further development of their style, the symphonic and classical texture is polished and refined and the atmosphere created is evocative indeed. The combination of a range of different forms from classical piano to choral renditions, injections of noise and occasional discordant elements, ethereal voices to rock motifs and occasional bursts of traditional horror fanfare make this an innovative and creative horror score.

It is a soundtrack which you will want to listen to again and again, it is great on a dark rainy night.